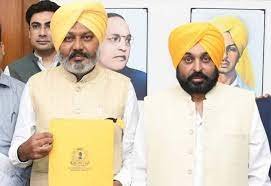 CHANDIGARH: Punjab Finance Minister Harpal Singh Cheema on Monday presented the AAP government’s first budget for FY 2022-23 in the state Assembly. He announced that the focus in the first year will be to restore deteriorating fiscal health, deliver on the promises of good governance and concentrate on health, agriculture and education.

The AAP government is fulfilling its first guarantee (promise) made to the people of Punjab by providing 300 units of domestic power supply per month free to all citizens from July 1, Cheema said. Presenting the Bhagwant Mann government’s maiden budget after AAP came to power in March this year, Cheema said the government has proposed to start the Punjab Young Entrepreneur programme to encourage class 11 students to propose their business ideas.

The state government will provide seed money of Rs 2,000 per student under this programme, the finance minister said as he presented the paperless budget.

The AAP government pledges to stand by farmers and shall continue providing free power to the agriculture sector, he added.

On the stubble burning issue, Cheema said various possibilities and solutions will be explored and for this Rs 200 crore has been earmarked in the budget.