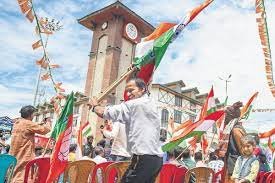 The Bhartiya Janta Party held its first-ever Tiranga rally at Lal Chowk in Srinagar, which historically seen tension over the hoisting of the national flag and once considered as stronghold of separatists.

Addressing the enthusiasts participants in rally, Tejesvi Surya, MP and National President BJP Yuva Morcha said that scrapping Article 370 had made such a rally possible and it’s now time for cultural and social reintegration Article 370, which granted the erstwhile state of Jammu and Kashmir special status, was scrapped by the Centre in August 2019.

“Taking the abrogation of 370 forward, it is our duty to ensure a complete, social, political, and economic re-integration of Jammu and Kashmir. This is a very very important civilisational task that young of India and young of Kashmir must be doing “said Tejasvi Surya.

Around 200 members of BJPs Yuva Morcha from across the country participated in the rally. They will also take part in the Kargil Vijay Diwas tomorrow, marking the anniversary of the end of the Kargil War.