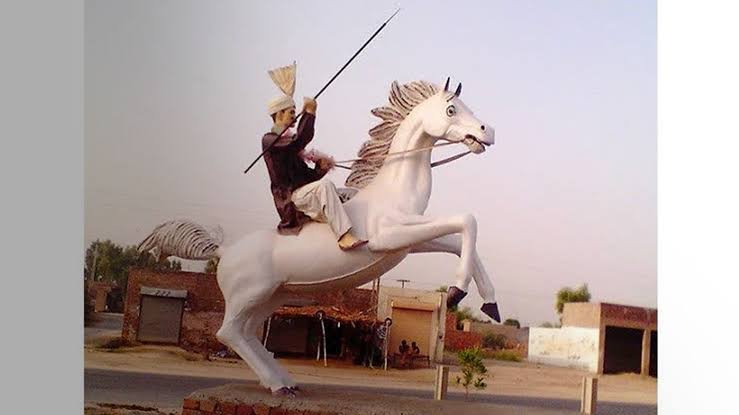 The popular winter festival of Lohri which is celebrated on 13th January every year is an auspicious Punjabi festival which commemorate with much fanfare in Punjab, Himachal Pradesh, Delhi, Uttarakhand, Jammu as well as in Punjabi speaking belt of our neighbor country Pakistan. It is synonymous with bonfire, til, jaggery and the famous song of Punjab with lyrics of this song are ‘Sundar mundariye, Tera kaun vichara, Dulla Bhatti wala…’.

The most remarkable feature of this festival is the gang of young children which visit every house in the locality and sing songs that commend Dulla and his giving of the Lohri gift to his daughter as a suggestion to the owner of the house to give them presents in the same way. Unlike our childhood days, though this remarkable feature of Lohri is fast fading away in our society but the legend of Dulla Bhatti, a muslim Rajput known as brave hero of Punjab was born as Rai Abdullah Khan Bhatti who stood up against mighty Mughal emperor will keep inspiring the generations till eternity for his bravery, empathy and protector of woman besides deeds that promotes communal harmony among people of different faiths.

Thus while celebrating Lohri it is appropriate to know who was Dulla Bhatti. For many Dulla is considered to be folklore. But, he is a historical figure who played an important role in history of Punjab’s culture. Born in village Pindi, Lahore, Dulla was contemporary of Akbar, Guru Arjan Dev and Shah Husain and inherited the legacy of non-conformism, resistance and martyrdom from his father Farid Bhatti and grandfather Sandal Bhatti.

As per historical literature, on assuming the throne, Akbar constituted number of parganas, posted faujdars and introduced centralized land revenue system on all crop lands. People of then united Punjab were unhappy with this rule which prompted and 2 brave Rajput muslim local zamindars stood up for the people. Farid and his father Sandal Bhatti commonly known as Bijli, fought against this oppressive rule and subsequently executed by the Mughals for their mutiny. When Farid Bhatti, the father of Dulla, was executed, his wife Ladhi, was conceived and after four months deliver a baby which later christened as Dulla. Ladhi was happy as she was blessed with the birth of a handsome son. But she also feared lest Dulla should toe the rebellious path of his elders and, hence, avenges the executions of his father and grandfather. The day Dulla Bhatti was born, Emperor Akbar was also blessed with a son Jahangir.

The soothsayers told Akbar that the prince would be brave and victorious in future if he was fed by a Rajput mother who had given birth to a boy on the same day that the prince was born.  Late Farid’s spouse Ladhi was identified. With all arrangements prince Jehangir was sent to her village with all arrangements. A special palace was constructed where the prince was to be brought up by Ladhi. This paves way for together brought up of Jehangir and Dulla by the wife of the rebel Farid who had been executed by Akbar. Several literature says that Akbar aware of rebellion and retaliation from brave and fearless Rajput muslim Bhatti clan with the birth of Dulla so he designed a clever plot to win over the widow and her son. By facilitating them with royal honour and comforts, he had planned to incorporate them in his complex network of hegemony. Dulla was sent to school to become ‘humanistic’, ‘civilized’ and ‘elite’. The young rebel could not struggle against the ideology of the school nor could he reform it. He also came into conflict with the qazi and defied the qazi’s school, the symbols of establishment and traditions of hegemony.

After leaving the school, Dulla got a catapult (gulail) made by the carpenter of his village and along with his gang of friends started shooting at the pitchers of the womenfolk who drew water from the village well. Eventually, fed up with the mischief, one of the village women taunted Dulla saying: ‘If you are so brave, take revenge of your grandfather and father who were beheaded by the Mughals and still the heads and the corpses of your elders are hung on the royal entrance, and it does not behove you to target pitchers carried by the women.

This ignites the inner rebellious spirit of Dulla and he immediately rushed to his house and insists his mother demanding to know the whole secret upon which Ladhi revealed the truth. Dulla was not simply concerned with the execution of his elders. It was not a vendetta. The execution was not of the father and grandfather, but of his elder rebels against the state of Akbar for past two generations. Dulla take up this peasant class war with his fellows and embarked on a career of banditry. Dulla waged a war. It is said that ‘so fierce was the resistance that Akbar had to shift the imperial capital to Lahore for more than twenty years’. This force Akbar’s to visit Guru Arjan Dev at Goindwal with royal exemption of land revenue of the area of Bari Doab. The emperor must have thought that exemption of land revenue would be an expedient strategy to pacify the peasants of the Bari Doab and win over the confidence of the guru who had his strong social base among the peasantry. The emperor was politically wise not to simultaneously open two fronts of confrontation, one represented by Dulla and the other by the guru Arjan Dev Singh.

Dulla was arrested and the emperor immediately ordered his execution in 1599. It was to be spectacularly carried out in the Nakhas area, Lahore (now Landa Bazar) because the emperor wanted the public to see the pain and fear of death on the face of Dulla standing on the gibbet. The emperor ardently desired to see the pride and bravery of the anti-establishment rebel broken down. But what the emperor desired did not happen. The way Dulla had lived; he died in the same spirit. The complexion of his rebelling spirit remained intact to the last moment. His grave is still in Miani Sahib cemetery where homage is being paid and on every Lohri he is being reminded for his deeds by Muslims, Hindu and sikhs alike especially in Punjab.

Dulla’s rebellion was not a strict class war. It was an archaic form of revolt, more of the social bandit character where he took from the rich and distributes it among the poor. What was probably the most effective contribution that Dulla Bhatti had was to save the girls of Punjab. It is known that girls from Sandal bar, Punjab (undivided) were abducted and sold off as slaves to traders in the Middle East. Dulla rescued these hindu girls and married them off to Hindu men. In one such act, there was once a poor Brahman, who had two beautiful daughters, Sundri and Mundri. Both the sisters were betrothed. But the landlord of the area had bad eyes on both of them. Knowing his desire, the poor Brahman requested the in-laws of the betrothed girls to immediately get the girls married and take them to their house. But the in-laws, scared of the landlord, refused to do so. Hearing the plight of Hindu Brahmin girls- Dulla Bhatti came to their rescue and helped getting them married to the boys to whom they were betrothed. Dulla Bhatti is known as the godfather of the girls in the folk tale.

A folk song, Sundri-Mundri is sung by the Punjabi folk on the occasion of the festival of Lohri. This song is in fact a tribute to Dulla Bhatti for keeping his bravery alive. Even to this day, the people of Punjab remember this brave warrior with a heart of gold.