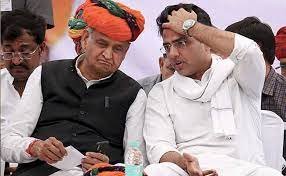 JAIPUR: Congress government in Rajasthan has plunged into crisis, even before Chief Minister Ashok Gehlot could file his nomination for the party President’s post. Last night, more than 90 Congress and Independent MLAs belonging to Ashok Gehlot faction met Assembly Speaker CP Joshi and handed over their resignations.

These MLAs are opposing the name of Sachin Pilot as the new Chief Minister of the state. Talking to the media, Cabinet minister Pratap Singh Khachariyawas claimed that 92 MLAs are with them. He said that there is resentment among the legislators.

Without naming Sachin Pilot, Mr. Khachariyawas said that legislators are against handing over power to any leader who rebelled earlier. He said that when there was a political crisis in the state, 102 MLAs had to stay in hotels for several days. The high command can Choose any of those MLAs as the chief minister.

By late evening, this number crossed 80. All the MLAs together reached speaker C.P.  Joshi’s residence and handed over their resignation. Late at Night, these MLAs returned to their homes. On the other hand, the Congress Legislature meeting to be held at the Chief Minister’s residence had finally been canceled after being postponed twice