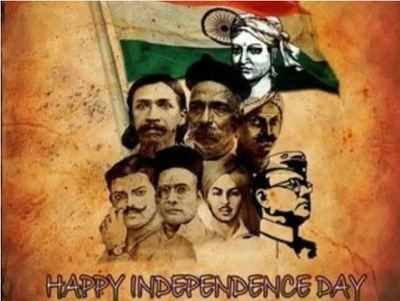 I am constrained to introspect and a little sad when I see that many nameless soldiers of Azaadi movement have been forgotten. Inquilab Zindabad, Karo Ya Maro and Tum Mujhe Khoon Do, Mein Tumhe Azaadi Dunga were clarion calls which were the symbol and force behind the collective opposition of the Indians against the Raj.

I am told that Payam-e-Azaadi-an Urdu Paper used to be edited by Mirza Bedar Bakht who supported the 1st war of Indian Independence in 1857. He was publically hanged and the readers of the paper from whose houses its issues were recovered were too punished by East India Co.

Post 1858, The Sedition Act 124-A was enacted and used to supress the tallest freedom fighter Tilak, who was imprisoned for 6-yr and his paper Kesari subject to prosecution. In 1898, the scope of 124-A was widened by inserting 153-A and later on 295-A was also made part of the sedition law. Ab Kehte Hain Sedition Law Khatam Karne Ka Time Aa Gaya hai.

There are numerous others, a part of a book in my possession costing Rs. 10/- who shed their sweat and blood for making this country free and expecting nothing in return. Team CVC salutes these selfless soldiers.

The contribution of a writer deserves mention. The reference is to Sadat Hassan Mantoo who experienced partition violence and trauma in personal life and fictionalised human instinct to partition affair. The present generation of ours should read stories like Thanda Ghosht and Toba Tek Singh depicting the deepest wounds of partition.

My esteemed father, who was a student in DAV College, Lahore in 1947 was so much disturbed by seeing the blood shed that he changed the course of life for a while and his Teacher Prof. Triloki Nath brought him back from Lahore to handover my father in young age to my grandparents. Kuch Purani Yaadein Tang Karti Hain.