JMC tweaks rules for restaurant of a bigwig 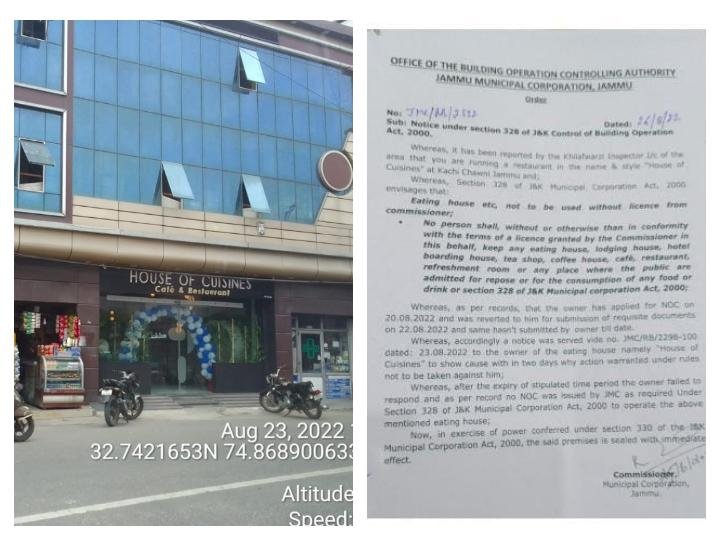 JAMMU: Messing with the blue print of Smart City concept, the Jammu Municipal Corporation is all set to de-seal a restaurant by tweaking its own rules for accommodating the business interests of an influential businessman.

Reliable sources told JK Global News that the Revenue section headed by Assistant Commissioner Revenue, Manisha Angral has accorded approval for issuance of NOC to the owner of restaurant – House of Cuisines.

The restaurant located at congested area opposite office of SSP Traffic City Jammu, if allowed to operate will further create traffic nuisance on Amphalla -Palace road patch which is already facing chronic jams in the area.

Providing details about the building bearing House No 76 which housed restaurant in question and owned by Shameema Begum w/o Ali Mohd Magray at Ustad Mohalla, the insiders in JMC building section said “The building has approved plan for lodge comprising 25 rooms. As per JMC building permission norms without space for parking, the plan for lodge even cannot be approved”.

The restaurant -‘House of Cuisines is established at ground floor which as per approved plan was parking of a lodge which is a huge violation as per BOCA laws, he added

The locals also blamed that JMC is hand in glove with the owner and hell bent to open the restaurant by hook  or crook despite having no space for parking.

“It is a mockery of law to allow opening of a restaurant having no space for parking by allowing it to submit agreement with third party for vallet parking -a new money minting methodology invented by JMC to accomodate wilful violators”, said a Rajan Kumar of Karan Nagar.

Interestingly, as per JMC  building permission bye laws, the commercial establishments which attract crowd should first have road width of 40 feet in front of the joint besides necessary provision for parking of vehicles.

Pertinently, the JMC Commissioner, Rahul Yadav vide order No JMC/RB/2332 dated 26/08/2022 has ordered sealing of the restaurant for violation of section 328 of J&K Municipal Corporation Act, 2000. Whereas, the sources privy to the development said ” The violation deserves sealing under BOCA laws, however, under pressure the authorities chose to seal it invoking section 328 so as to give benefit to the violator at later stage on flimsy grounds.

When contacted, Manisha Angral, ACR JMC said “I am not ‘aware’ of this development and let me check the records”. However, despite our repeated attempts to contact her for further clarification on issuance of NOC,  she preferred discreet silence.