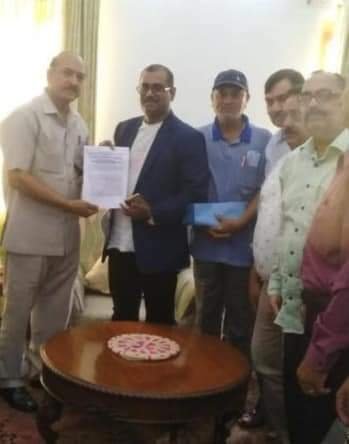 JAMMU: Taking cognizance of circumstances which results in death of a professor belonging to dalit community, the National Commission for Scheduled Castes (NCSC) has sought an Action Taken Report (ATR) from University of Jammu as well as police authorities.

The team of NCSC on Tuesday took serious note of media reports and complaints received by commission from different quarters over the death of Prof. Chandra Shekhar due to alleged harassment by JU Registrar, HoD Psychology Deptt and CASH committee members has assured that the culprits will be booked under SC, ST Atrocities Act. The National Commission for Scheduled Castes will ask Chief Secretary J&K to avoid discriminating against the Dalits in the Union Territory, Commission’s Vice Chairman Arun Halder said

Several delegations including teaching and non teaching SC union of JU apprised the NCSC team about ill treatment meted out the deceased teacher in his department and demanded CBI probe. They sought immediate removal of Registrar JU Arvind Jasrotia, HoD Psychology-Prof. Arti Bakshi besides CASH committee members from their positions for free and fair investigations.

The delegations of SC communities urged the NCSC for registration of FIR under SC, ST Atrocities Act against all the accused who are prime facie responsible for instigating Prof Chander Shekhar to allegedly commit suicide.

.
The commission interacted with wife of deceased teacher as well as the Vice Chancellor University of Jammu and Registrar and other officers over the incidents. As per reports, the commission is planning to hold full bench at its Headquarters in Delhi where in JU authorities, all the 23 Students and HoD Psychology who allegedly cooked conspiracy against Shekhar will be cross examined separately.

They apprised the commissions that Dr. Chandersekhar who was working as Associate Professor in Psychology Department of Jammu University and was going too elevated as HoD ending September was coerced to allegedly commit suicide by some anti-dalit lobby in JU.

In a memorandum signed by retired college Principal Prof ((Dr) G.L. Thapa, Mohinder Bhagat, Sham Lal Basson T.C. Bavouria and Sudhir Kumar, the JKRCEA further apprised the Commission that there are ample evidences which indicts some students were instigated by incumbent HoD Prof. Arti to falsely implicate Dr. Chandersekhar with intense desires and calculated game-plan to stop him from assuming charge of HoD and the conspiracy was planned in such a manner that CASH committee in a preset mind completed inquiry within only 2 working days sans opportunity to deceased Shekhar when as a matter of fact it never bothered to complete the inquiries in the past in such a haste.

Blaming that the CASH committee scuttle principle of natural justice and the JU authorities issued suspension order of Shekhar by violation of clause Vi.4, 4(A), (B) & (C) as well as clause VIII & IX as well, the JKRCEA in its memorandum said that it has been learnt that he was verbally harassed and insulated on the day of suicide and HoD Psychology Prof. Arti Bakshi allegedly used to insult Dr. Chandersekhar whom she never wanted to hand over charge of HoD.