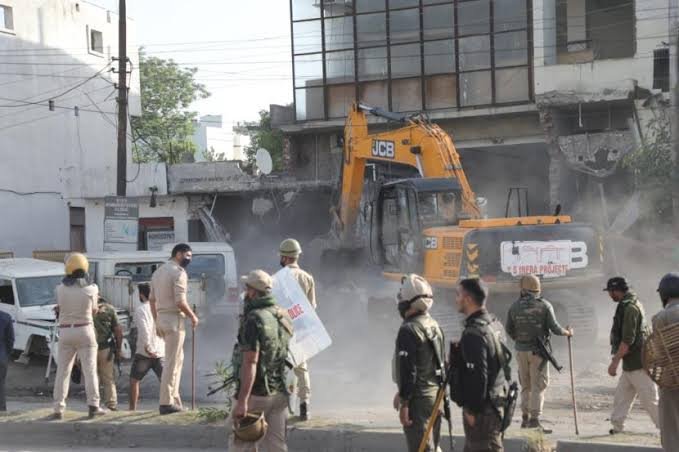 At the fag end of year 2022, the Government of Jammu and Kashmir Union Territory has taken a final call to remove all encroachments from state land within a span of 90 days.

Its a tall order and seems to have no takers in the light of past experience. Anyhow, the intentions of LG’s administration are apparently honest but there are many slips between the cup and the lip.

For the information of everyone, the administration in the month of April, 2022 has conducted crackdown on land grabbers including a dozen of serving as well as retired officers/officials of revenue department besides a solitary media house. The police at a breakneck speed has also bragged of recovering plethora of revenue records reportedly missing from the revenue department. But, the way in which the police in collaboration with civil administration swooped on the shaddy revenue officials and land grabbers failed to deliver the tangible outcome of the said loud mouthed exercise conducted with much fanfare with its epicentre at Channi Police Station.

During this pious exercise, two lists which includes 29 high profile land grabbers/ property dealers and 32 corrupt revenue officials went viral on social media. In addition to this, another list of 22 tainted worthies who were developing illegal conies by encroaching upon substantial chunk of state land was also posted in the public domain.

Despite the knowledge of administration nothing concrete emerged against these identified land grabbers/property dealers as well as corrupt babus of revenue department which raises a big question mark on the repeated honest claims of powers that be.

The whole mess is not the making of petty actors as there exists a web of well organised sharks comprising a section of politicians, property dealers, media houses, police officers and bureaucrats who are instrumental in facilitating encroachment upon various shades of lands worth several crores and also frustrate anti encroachment drives to reach their desired result. The case in reference is of Sunjawan, Chowadhi, Birpur, Bari Brahmana, Kot Bhalwal, Bhathindi and Kathua.

The LG’s administration has vowed to clear all encroachments across the length and breadth of J&K UT within a time span of 90 days but the point is that who will plug the loopholes and gaps in the concerned departments entrusted with the task of operation anti-encroachment as the judgement in the Roshni scam delivered way back in October 2020 has been observed more in violation than in observance.

Retrieval of encroached land  running into lakhs of hectares is an acid test for governance now in our UT as even the small fries of Revenue department dictate their terms and conditions and law unto themselves. It requires herculean courage to dismantle the infrastructure of encroachments in J&K UT as selective retrieval germinates doubts about the intention of the government.