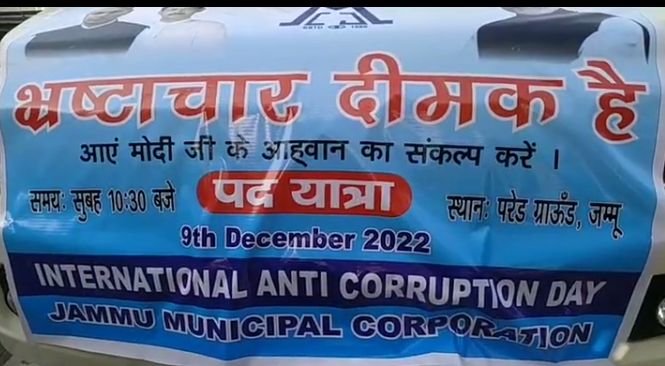 Celebrating Anti-corruption day by resorting to theatrics is alien to its spirit. It is a serious exercise compelling all and sundry to introspect as to where we have fumbled and distorted our priorities in tackling ever growing menace of corruption. The recent attempts at shielding the kingpin of JKSSRB exams scam as well as Naib Tehsildar (Bahu) who was caught red handed by ACB shows that intricate web of corruption in our UT is highly intact and needs to be dismantled with an Iron will instead of hollow sloganering and pontificating, says Prof SK Bhalla.

JAMMU: On International Anti Corruption Day, the Jammu Municipal Corporation (JMC) under the dynamic leadership of visionary Mayor Rajinder Kumar Sharma has taken out a rally purportedly to end the gigantic demon of corruption from the society in all earnestness.

The media glare exercise though apparently laudable yet the ground realities generally prevailing in government departments especially the Jammu Municipal Corporation appear to be topsy turvy.

A threadbare analysis of Mayor’s predictions for transparency in his organisation seems to be cosmetic surgery as the tangible outcome of goody goody nonstop talks are now where visible in curbing the menace of corruption which is rampant.

For the consumption of authorities there are reports that large scale corruption has taken place in de-sealing of several illegal establishments which were sealed in the last three years.

“Referring to de-sealing of 1 A Pvt Gandhi Nagar, 84 B/B Gandhi Nagar and  120 A Gandhi Nagar behind Apsara lane, insiders in JMC said “Scores of buildings which were sealed in violation of land use Act in last 3 years at Gandhi Nagar, Shastri Nagar and Nanak Nagar were de-sealed on flimsy grounds. In some cases, the owners opened the seal on their own and no action taken against them despite the fact that matter has been in the knowledge of higher ups“.

Even, the register which maintain the record of sealing/de-sealing and demolition on regular basis is not being maintained for the last 6 months for obvious reasons, added reliable sources in JMC.

The worst scenario prevails in works department, Revenue and Sanitation wings of JMC where corruption rules the roost and this is no more a secret.

Giving details a middle rung officer of JMC works department said “Hundreds of works worth several crores were allotted in the last 2 years for maintenance of lanes and drains but due to poor supervision by the engineers most of these are executed in sub standard manner with the connivance of contractors”.

Moreover, the silence of higher ups in the JMC over exchange of money for adjustment of 10 SKCs with verbal order is a case of abuse of power and indicts mess prevailing in health and sanitation wing of JMC.

Situation is also not rosy about the encroachment of footpaths by street vendors and Rehari mafias which have virtually become money minting kingdom for babus in sanitation and revenue wing of JMC, alleged insiders.

Yesterday, only couple of corporators open the pandora box terming the ongoing ‘My Town, My Pride’ as directionless as well as meaningless exercise which was more visible in Flex Hoardings that spoiled the urban landscape of JMC jurisdiction. Crores have been gone down the drains to create visual pollution under the garb of display of flex hoardings in irregular manner bypassing the authorised space kept reserved for hoardings by JMC.

It appears to be an extravaganza at the cost of honest tax payers money, opined Councillor Gourav Chopra.

JK Global News Take : Much ado about nothing is the guiding mantra of JMC these days. The learned Mayor is on a self promotion spree instead of eradicating the corruption tentacles widespread visible on the ground. Actions speak louder than the words is an age old adage and hope the new Mayor shall take a serious note of this unsolicited piece of advice.