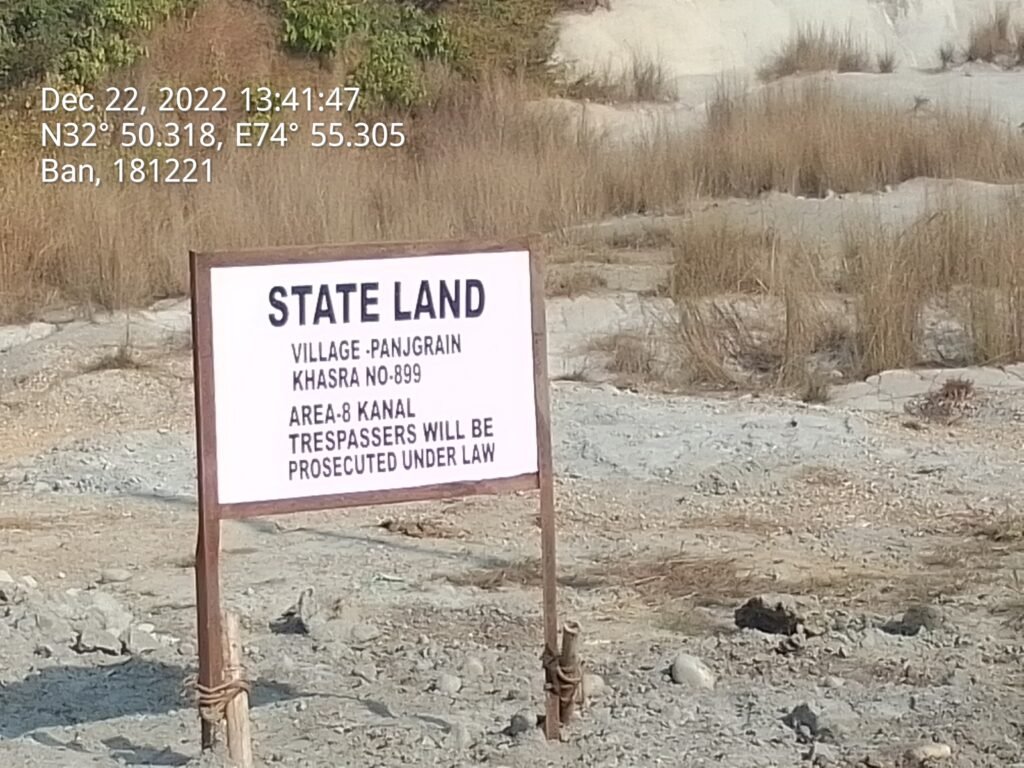 Aiming its canons against the mighty land grabbers, LG Mr. Manoj Sinha’s administration in all earnestness is all set to throw lock stock and barrel all encroachers of various hues in the light of Circular No 02-jk (Rev) of 2023 dated 9/1/23. The circular issued by Commissioner Secretary Revenue Department Mr. Vijay Kumar Biduri has impressed upon all the Deputy Commissioners to remove 100 percent encroachment by 31st January, 2023.

The spirit behind the issuance of this high voltage order is not suspect but as per past practice it has been observed that the tall claims made from the corridors of power have miserably failed to achieve the desired targets pertaining to encroachments visible across the length and breadth of Jammu and Kashmir UT. In past, the drive to retrieve land has been launched with a political vendetta by targeting only a few political personalities who failed to toe the line of the current dispensation. There are reports that many influential folk belonging to political parties that ruled the erstwhile J&K state as well as Bharatiya Janta Party remained unscathed despite the fact that they are in possession of huge chunks of prime state land in Jammu, Kathua, Samba, Udhampur etc districts.
Removing encroachments from state land as well as Khacharia is seemingly a herculean task for which our authorities are not apparently well equipped as the order of removal by 31st January 2023 came at a time when entire administration is engrossed in ensuring peaceful celebrations of Republic day in UT amidst looming threats of terrorists to stall the same.

The anti encroachment drive is a mammoth task which cannot be done in a jiffy without the active deployment of heavy contingents of police. Acting against lesser fries is not the panacea as this exercise will lead to a chaotic situation as the same will be used as fooder for personal gains by politicians. For concrete results the government should in the first instance lay hands on big sharks which include powerful politicians, bureaucrats, police officers, property dealers, businessmen and officers of judiciary. It is the apprehension of the masses that in the planned anti encroachment drive only weaklings would be affected and the whales and sharks will go scot free. Thus it is imperative that the government should adopt top down approach. As per government estimate at the time of implementation of Roshni Act nearly 20,64,972 kanal of state land worth around Rs 26,000 crore is under illegal occupation of land grabbers.

Whereas, the figures published by the government from time to time about retrieval of encroached land are minimal and only projected in media for hogging the limelight. If the government is really serious about this encroachment mess, then they should put in public domain on daily basis the retrieval data which they have been receiving from their DCs in the format devised by the Revenue department.

Even the government is silent about illegal colonies being developed by a self styled media tycoon in Chowadhi, Birpur and Sunjawan as well as by several real estate players in Kot Bhalwal etc on encroached state land which is a matter of profound concern. In addition to the aforesaid, there is free for all encroachment of public space, roads and footpaths by way of permanent kiosks everywhere in Jammu Municipal Corporation jurisdiction. This unholy nexus of encroachment in JMC jurisdiction is managed by well connected Rehri mafia in connivance with police personnel of respective police stations and officials of JMC.

There is no doubt about the honest intentions of administration in removing encroachments as per the direction of Court but of late in broad day light land grabbers openly encroached upon a portion of children graveyard located at Qasim Nagar, Jammu in ward No 47 . The matter is in the notice of Chief Secretary as well as DC Jammu, VC JDA, JMC Commissioner and Mayor Jammu but despite lapse of a month the illegal structure raised on encroached graveyard land is still intact. Similarly, the Mayor JMC Mr. Rajinder Sharma who is very vocal in media about the anti encroachment drive of DC Jammu and cribbing about not having taken him into confidence, however is on the back foot over the failure of JMC in removing the burgeoning encroachments everywhere in JMC jurisdiction. The Govt talks tall about transparency and accountability in all domains. The need of the hour is no further pontification but palpable deliverance on the ground over this vexed issue of land grabbing.

(The author of the article is a retired Principal of HED and a renowned anti corruption crusader. The views expressed are personal and he can be reached at 7051218339)