PIL on Stampede: DB directs Adm, SMVDSB to file response in one month 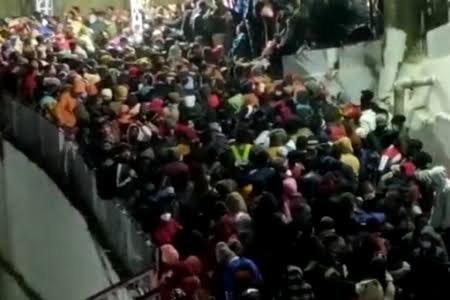 JAMMU: In a significant development, a Division Bench of the High Court of Jammu & Kashmir and Ladakh at Jammu (through Virtual Mode from Srinagar) comprising its Chief Justice Pankaj Mithal and Justice Sindhu Sharma allowed a month’s time to the Secretary, General Administration Department(GAD), Govt. of J&K, Principal Secretary to the Hon’ble Lieutenant Governor of Union Territory of J&K, Financial Commissioner (Additional Chief Secretary) Home Department, J&K Govt, ADGP(Jammu Zone), Divisional Commissioner (Jammu), Chief Executive Officer, Shri Mata Vaishno Devi Shrine Board(Katra) and others in a Public Interest Litigation (PIL No. 12/2022) seeking directions to the Government of J&K to make public the Inquiry Report of 03 Members Committee constituted vide Govt. Order No. 01-JK(GAD) of 2022 dated January 1st, 2022 to look into the unfortunate incident of stampede at Shri Mata Vaishno Devi Ji Shrine (Bhawan) in Katra, in the intervening night of December 31st,2021 and January 1st,2022 which resulted into the unfortunate death of 12 devotees and several others were injured.

These directions were issued in a PIL field by Advocate Sheikh Shakeel Ahmed through Advocate H.A. Siddiqui wherein the Public-Spirited Lawyer has sought directions to the UT Administration and Shri Mata Vaishno Devi Shrine Board(Katra) to fix the accountability of the delinquent officers/officials who remained remiss in the performance of their duties on the fateful night when 12 innocent Yatris lost their precious lives.

After hearing Senior Advocate A.V. Gupta with Advocate H.A. Siddiqui and a battery of lawyers appearing for the petitioner in the above said PIL and the petitioner-in-person, the Division Bench headed by Chief Justice Pankaj Mithal observed and directed in the open court that AAG Raman Sharma appearing for the UT Administration prays that he may be allowed time to seek instructions in the matter.

The DB further observed that in view of the above and as prayed for, a month’s time is allowed to him and if necessary, he may file comprehensive reply. The DB on the prayer of Advocate Adarsh Sharma appearing for Shri Mata Vaishno Devi Shrine Board, Katra also granted him time to file response and time was also granted to Deputy Advocate General K.D.S. Kotwal appearing for the Government of J&K to respond in the matter.

When this PIL came up for hearing Senior Advocate A.V. Gupta with Advocate H.A. Siddiqui submitted that the instant PIL highlights the issue of wide public importance as 12 devotees lost their lives in the Holy Shrine of Mata Vaishno Devi because of the negligence on the part of the officers/officials of Shri Mata Vaishno Devi Shrine Board who miserably failed to perform their lawful duties on the fateful night and unfortunately the accountability was not fixed in the matter for the reasons best known to the authorities at the helm of affairs.

The Senior Counsel A.V. Gupta assisted by Advocate H.A. Siddiqui vehemently argued that the Lieutenant Governor,J&K who is Chairman of Mata Vaishno Devi Shrine Board, Katra on January 1st, 2022 constituted a 03 Members Inquiry Panel headed by then Principal Secretary (Home), J&K Government to look into the unfortunate incident and to examine in detail the causes/reasons behind the incident and to point out the lapses and fix the responsibility thereof and to suggest the appropriate SOPs and measures for preventing recurrence of such incidents in future. The Senior Counsel further submitted that the aforesaid panel was directed to submit its report within weeks’ time to the Government of J&K.

While buttressing his arguments, the Senior Advocate A.V. Gupta submitted that almost 09 months have elapsed but the Inquiry Report is yet to see the light of the day and it is quite unfortunate that matter of wide public importance was buried in a manner unknown to law. The attention of the Division Bench was also drawn to the RTI information wherein GAD divulged that no such Inquiry Report has been received by the GAD.

In the PIL, astonishing revelations have been made and it is averred that on the fateful night the Senior Officers of the Shrine Board reportedly stopped the Yatris from having Darshan with the result a huge crowd got assembled outside the Bhawan and the Yatra was stopped to facilitate the Darshan of Holy Deity to a VVIP (reportedly a Senior Bureaucrat of the UT Administration) and because of this the unfortunate stampede took place on the eve of the New Year which resulted into the death of 12 innocent pilgrims.

Senior Advocate A.V. Gupta assisted by Advocate H.A. Siddiqui further submitted that the petitioner made lot of efforts to persuade the authorities to make public the 03 Members Inquiry Report and even made a representation to the Chairman of the Mata Vaishno Devi Shrine Board Katra but till date nothing has been heard in this regard and the petitioner was constrained to knock at the doors of this Court.

After considering the submissions of Senior Advocate A.V. Gupta with Advocate H.A. Siddiqui and a battery of lawyers appearing for the petitioner as well as the submissions made by the AAG Raman Sharma, the Division Bench headed by Chief Justice Pankaj Mithal, allowed a month’s time to the UT Administration and Shri Mata Vaishno Devi Shrine Board, Katra to file their response by or before the next date of hearing. The DB also granted time to AAG Raman Sharma to seek instructions in the matter.

Keeping in view the public interest involved in the matter, the Division Bench directed the Registry to re-notify the instant PIL on 28-10-2022.