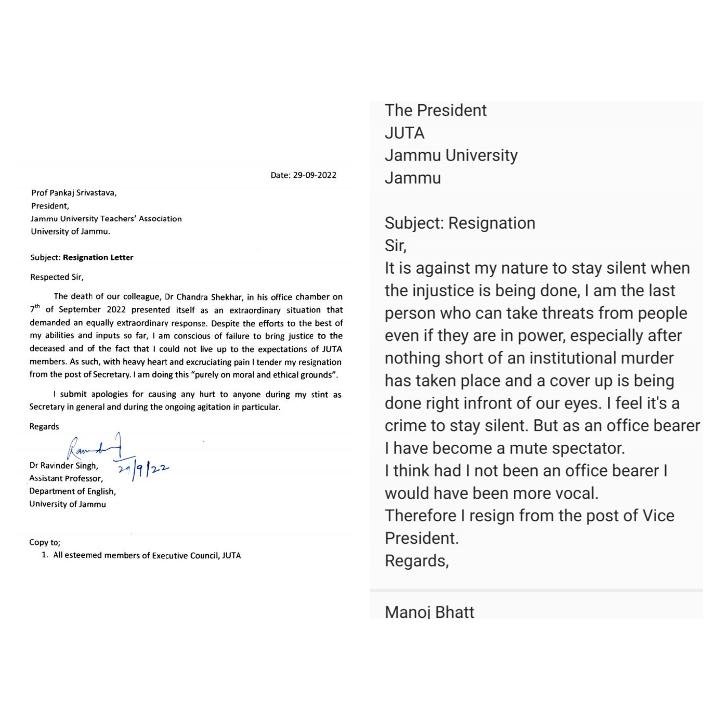 Resignations by two JUTA office bearers shows the teachers body forfeited its right to continue in present shape. The situation warrants removal of President Prof. Pankaj Srivastava through No Confidence Motion for breach  of trust and faith

JAMMU: Two days after Jammu University Teachers Association decided to end its 19 days long pen down strike by stitching tailored made decision in Executive Council Meet, the two office bearers have tenders their resignation in protest against the decision of the JUTA President to call off strike which was launched for seeking CBI probe into  ‘institutional murder’ of Prof. Chandra Shekhar in Jammu University.

In his resignation letter, JUTA Vice-President Prof. Manoj said “It is against my nature to stay silent when the injustice is being done. Institutional murder has taken place and a cover up is being done right in front of our eyes”.

It is a crime to stay silent and as an office bearer I have become a mute spectator. I think had I not been an office bearer, I would have been more vocal. Therefore, I resign from the post of Vice-President” reads letter of Prof. Bhat addressed to JUTA President Pankaj Srivastava.

Similarly, Dr. Ravinder Singh, Secretary JUTA in a letter while justifying ground for resignation said “The death of Prof. Chandra Shekhar in his office chamber presented itself as an extraordinary situation that demanded an equally extraordinary response”. I realize failures to bring justice to the deceased and thus relinquishing my position on purely “moral and ethical grounds”, reads Dr. Singh’s resignation letter.

Reacting to the development, a former registrar of JU while talking to JK Global News said that these resignations virtually left JUTA President red faced and exposed sell out on Prof. Shekhar death. Shameful. Resignations of two important office bearers of JUTA confirm decision to call off strike was not unanimous and taken under duress, he added.

These are not resignations but a slap on the face of JUTA president, avers another member of JU teaching fraternity.

Dramatic decision to call off the strike without getting any respectful response from authorities by venturing into ECM instead of General Body Meeting itself shows that JUTA has compromised its stand on strike under influence of hidden elements, avers a faculty member of Life Learning department.

The resignations letters of office bearers is an eye opener to the fact that though majority of teachers acts as fence sitter over the death of Shekhar but still some members of JU teaching firmly vying for CBI probe and removal of officers who are in eyes of storm for pronouncing haste decision against deceased, added another senior professor of Science Faculty in anguish.

JKGN tried its best to contact the office bearers in question as well as JUTA President to seek their response on the development but none of them were available.