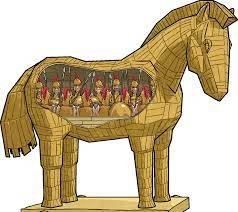 JAMMU : Missive dashed by an academician of Jammu University to end on going strike has evoked sharp criticism from teaching fraternity who are protesting since Sep 9, 2022 for CBI inquiry into mysterious death of Prof. Chandra Shekhar as well as removal of all those ganged up for issuance of suspension order in haste sans due process of law.

“Letter by Prof. Deepankar Sen Gupta imploring JUTA President to end strike not only appears meaningless and directionless but also shows his carefree attitude towards tragic death of our colleague inside the premises of Psychology department on September 8”, angrily said a lady professor of JU. This letter is nothing more than a Trojan Horse which deserve devastation, she added.

Here we are of the considered opinion that Prof Sen’s communication has been debunked by JUTA President Prof. Pankaj Srivastava to set the record straight. We are reproduing the reply of JUTA President in verbatum for the readers to draw their own conclusions for ensuring justice and fair play to deceased Prof. Chandra Shekhar and his immediate family.

Being an esteemed member of JUTA, you could have exercised your right of expressing your views in the special GBM or on the site of Protest, but the mode of your communication in the form of an open letter is intriguing. I have gone through your thoughts conveyed through a letter dated 24/9/2023 (I take date as a typographical error), received through WhatsApp and email, to call off the strike, at a time when the University is shaken not only by the demise of one teacher of Psychology Department but the way whole issue has been dealt by the University Administration.

In this connection I wish to state that since you have chosen to be away from the strike, Special GBM and also defied the JUTA appeal to not give examination duty in JUET, many of your observations are based on hearsay. Your letter has also been leaked to the News Paper which has also pained me in same manner as the Administration has been publishing Appeals in News Paper after the Vice Chancellor had made his appeal in front of all the teachers.

I, however, would like to give pointwise reply to your letter:

The University Teachers have been on the Strike since 9th September 2022 as one of our colleagues, Dr Chandra Shekhar, Associate Professor in Department of Psychology, was found hanged from the fan in his official chamber in office hours in suspicious circumstances, minutes after receiving the suspension order from the Registrar. The suspension order, which was also recovered by police from the pocket of Dr Chandra Shekhar in mortuary, also mentioned that he was suspended based on the JUICCASH opinion. In that letter there is no mention of the any other rule than the JUICCASH, under which the suspension is ordered. So your argument that the University Authority has suspended Dr. Chandra Shekhar under the rule mentioned under the Rule no 16(2) of Chapter 3 of University Calendar Volume- I, has no basis.

Was Chandra Shekhar’s case unique in the history of the University that he was even denied to know under which rule he was being suspended?

We are on strike because we are convinced that once the case is forwarded to JUICCASH, it has to be inquired by the procedure, as mentioned in the Jammu University Internal Complaints Committee Against Sexual Harassment (Prevention, Prohibition and Redressal) Regulation 2017 (Notified vide Estab/18/8086–9085 dated 09/01/2018) and the Interim Redressal be given to the complainant as recommended by the JUICCASH. We are also convinced that the procedure as mentioned in the Regulation has not been followed and the respondent (Dr Chandra) was neither given a copy of complaint within seven working days nor was given a chance to reply.

Any 12 (B) University is governed by UGC regulations coupled with its own rules and statues. The rules of state/UT government or any other agency are evoked only if the rules of the University are silent. But for cases related to sexual harassment, the rules of JUICCASH and UGC exist, then how and why some other rule, if at all, was evoked?

The house gave equal opportunity to each and every member to speak in the special GBM, however when some honorable members spoke out of context, they were objected to by other members present there (which you prefer to call hooting). However, within no time the house came back in order and the President and subsequently other members deliberated the issues in detail. Moreover, you must understand that such disturbances are as much a part of democratic discussion/process as clapping, and therefore your advisory, that too when you were not part of that meeting, are completely uncalled for.