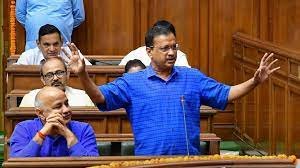 NEW DELHI: Sharpening attack against union government, Delhi Chief Minister Arvind Kejriwal on Monday said that the Modi government is the “most corrupt” India has ever had since Independence. He made the scathing remarks against PM Modi, as he made a confidence motion in the Delhi Assembly to prove he enjoys a stable legislative majority.

In the House, Kejriwal said “From the ramparts of the Red Fort he talked about fighting corruption but the BJP tried to purchase AAP MLAs. This is their fight against corruption.” “I am bringing a Confidence Motion to show that BJP’s ‘Operation Lotus’ failed in Delhi. The BJP could not purchase even a single MLA from AAP despite an offer of Rs 20 crores for each MLA”, thundered CM Kejriwal.

People all over the country are very worried about inflation, he said, but the BJP has been increasing taxes on everything. Taxes have been imposed on milk, curd, flour and buttermilk.In Gujarat, a tax was imposed on the Garba dance which is performed during the Navratri celebration, Kejriwal added.

Further Kejriwal alleged that BJP brought down the governments of Maharashtra, Karnataka, Madhya Pradesh, Goa and others. Now the government of Jharkhand was about to be demolished. He said the Centre heaps tax burden on the people and uses the money thus generated to topple state governments held by other parties. So, if fuel prices are expensive, then one must understand that some state government is going to fall, he avers.