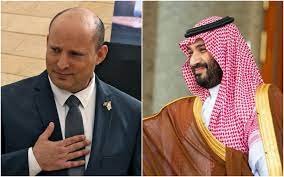 JERUSALEM: Military officials from Saudi Arabia and Israel have met in secret US-brokered talks to discuss defence coordination against Iran, according to a report.

Delegations from Riyadh, as well as Qatar, the United Arab Emirates, Bahrain, Jordan and Egypt, met the Israel Defence Forces (IDF) chief of staff in the Egyptian town of Sharm el-Sheikh in March, the Wall Street Journal revealed on Sunday, citing US and regional officials.

The US was represented by Gen Frank McKenzie, the former head of US Central Command, whose area of responsibility was expanded under Donald Trump to include Israel.

The unprecedented summit marks the first time Israeli officials have met with such a wide range of counterparts from the Arab world, with the aim of countering the shared threat of Tehran’s growing missile and drone capabilities.

Israel has no formal diplomatic relations with either Qatar or Saudi Arabia, the region’s geopolitical heavyweight, which is vying for influence with Iran.