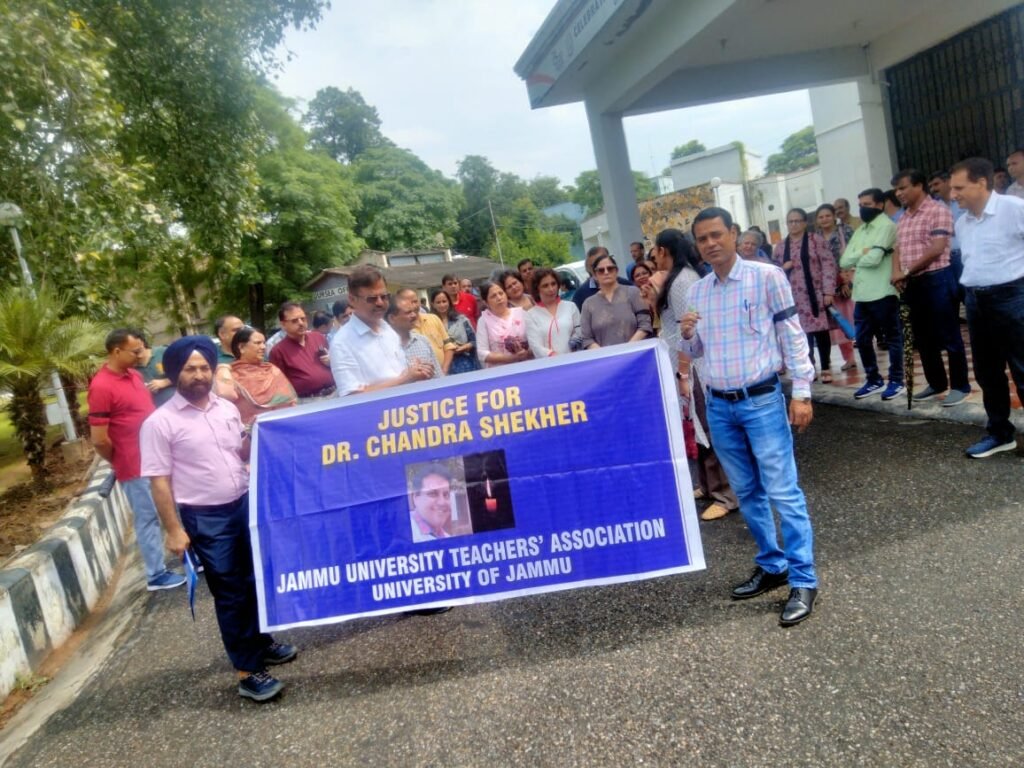 JAMMU: The pen down strike of Jammu University Teachers Association (JUTA) which commenced on September 9 have so far fail to yield any positive outcome as the Vice Chancellor Prof. Umesh Rai is apparently still sticking to its rigid stance.

The circumstances which provoked a dynamic teacher of Psychology to end his life have seriously been view by several academicians as an unhealthy trend which is incompatible with vision of university and not at all expected from highly educated lot of society.

Scores of teachers belonging to the dalit community in JU have apprised the JK Global News about the saga of discrimination and Ill treatment meted out to them at the behest of a sick lobby which fond of driving peculiar pleasure by troubling them on one pretext or the other.

“Same lobby destroyed my career and use every tactics to stop me fighting. As single woman they employed every tactics to intimidate me at my residence. I had to shift from the campus. But didn’t stop my fight. Unfortunately prof Chandra couldn’t bear their torture. His sacrifice is the eye opener for those dalit employees who acts as stooges of JU authorities and speak their language for petty personal gains, said a female teacher of JU, wishing anonymity.

Academically, the varsity have came to standstill owing to stalemate between the VC and JUTA. If this impasse continues to persist for more days this is going to prove costly affairs for varsity, said an officer of JU.

Those whose names are doing the rounds for procedural lapses in issuance of suspension order and subsequent humiliation thereafter in Psychology department which provoked Prof Chandra Shekhar to allegedly commit suicide should take the lead to end the impasse for larger interests of institution and voluntarily relinquish office without further delay, opined a senior professor of JU.

For highest chair there is nothing wrong in moving an inch forward and accord approval for CBI probe to allay apprehension of teachers against the credibility of SIT. If things are in order then what is the need to afraid of CBI, asserted a teacher of law department.

There is also discontent prevailing among a section of teachers on campus over the way JUTA is pursuing the matter in support of their demands.

The decision to hold protest on road for submitting memorandum of demands to Divisional Commissioner, Jammu appears directionless. Instead, the JUTA should held peace rally m upto Raj Bhawan, added a member of JUTA.

Asserting that there is no point in being soft while on agitation in support of genuine demands, a teacher wishing anonymity said “To awaken the authorities from deep sleeper, the JUTA needs to visit VC office chamber and ensure token sloganeering everyday”.

If things keeps moving half heartedly then soon most among will start feeling restless and agitation launched to seek justice for deceased Shekhar will die on its own, he cautioned.

With every passing day some new players are being roped in to scuttle our genuine agitation and this compelling situation demands planning things in more convincing and impactful manner for accomplishing our goal which may appears difficult but not at all imposible for us to achieve, said a professor of distance education.