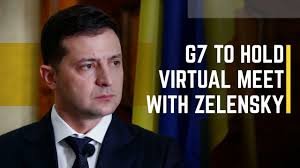 The Ukrainian president has met G7 leaders via video as US government sources briefed that Washington plans to announce as soon as this week that it has bought a Norwegian advanced surface-to-air missile defence system for Ukraine.

The announcement of the Nasams purchase will meet one of the key requests from Volodymyr Zelenskiy, who has been warning his key cities are defenceless against Russian missile strikes including those that rained down on the capital, Kyiv, on Sunday.

Zelenskiy’s meeting with the G7 leaders was not shown to the public – he could be seen on a television screen next to the round table where the leaders sat at the summit venue – but in his overnight address to the Ukrainian people he said the country needed a powerful, modern and fully effective air defence system that can ensure complete protection against such missiles. “We talk about this every day with our partners. There are already some agreements,” he said.

Bangladesh PM urges UN for resettlement of Rohingyas in Myanmar